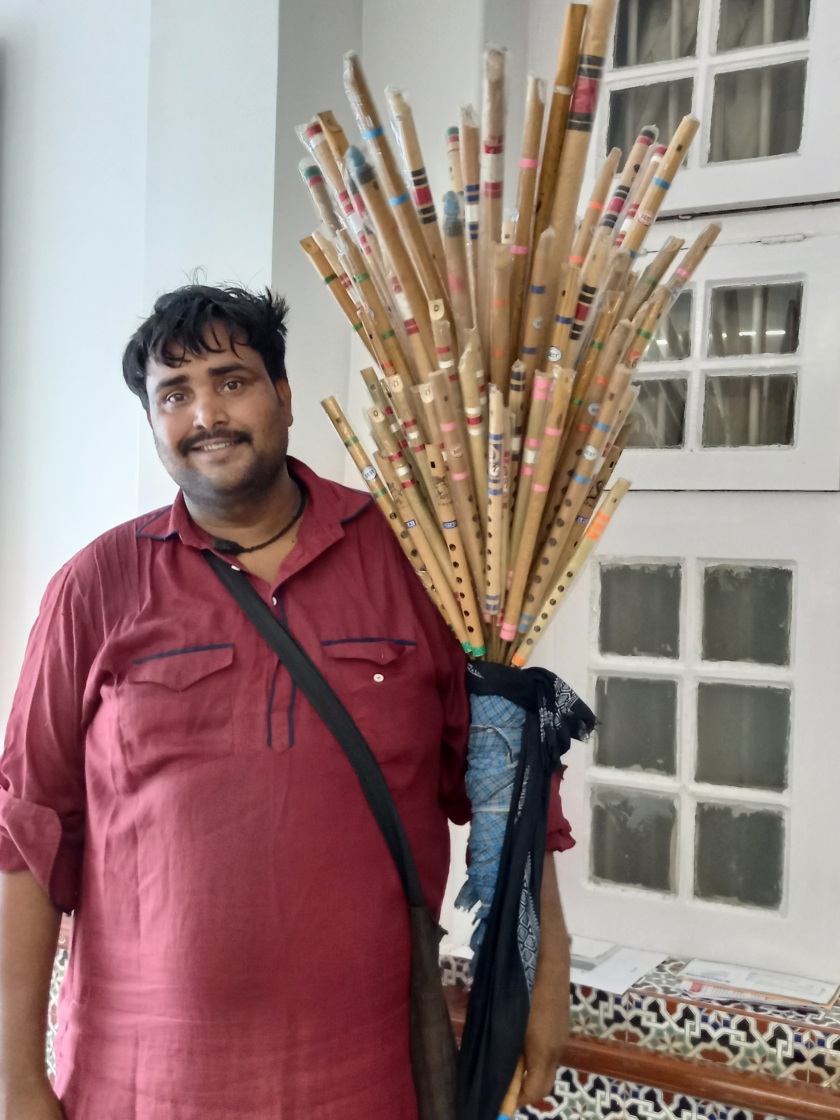 Meet Naushad Ansari, all of 35 years of age as he goes about from neighbourhood to neighbourhood mesmerising people playing the bamboo flute — or what is popularly called the bansuri in India — whilst trying to sell the magical instrument. Recently I got down to engage in a conversation with him.

Born in a family of seven children (five sons and two daughters), in Faizabad, a town in Northern India’s Uttar Pradesh state, Naushad managed to study barely till the second grade. Son of Omar Ansari, a flute maker, seller, and player, Naushad felt it was his call of duty to chuck up his studies and help his impoverished family. He started supporting his father’s trade at an early age.

Can a second-grade student ever make such a decision? He says giving up school was much against his father’s wishes, so this is more likely a decision made by his mother. On being asked why his elder brothers didn’t step in since he was third in line among five male children, he said his elder brothers refused to help and have moved away from the family.

His father, he says, played a motley set of tunes ranging from raags to popular Bollywood hits. Apparently, his father refused to teach him playing the flute because he wanted to see his son study. So, Naushad decided to experiment with the flute himself and soon taught himself to play. At age 10, he had learnt the flute and at the ripe age of 18 he began to start making flutes. He moved initially to Delhi where he would sell his wares in Sadar Bazaar. Two years later, the lure of the maximum city which hosts Bollywood drove him to relocate to Mumbai where he is based since the last 15 years.

Nalla Sopara is a distant suburb of Mumbai and is the district in which Naushad resides. Every Sunday he travels about 75 km one-way to do his rounds in my borough. Married and with three daughters and two sons, he has managed to provide his children the schooling experience that was snatched away from him. His children vary from age three to 14 and they are well settled in a local school. He earns anywhere between Rs 200 ($ 2.5) and Rs 1500 ($ 19) daily with an average of about Rs 500 ($ 6) and occasionally nothing.

On asking him which were his favourite tunes he mentioned pal pal dil ke paas (moments near to the heart) and sawan ka maheena (a month in India’s monsoon season). He graciously offered to play these for me.

While speaking with Naushad I shared my own experience learning to play the bansuri. It was about two decades ago that I took to learning the flute. My teacher got me started with a type of bansuri that maestros such as Hariprasad Chaurasia regularly play at concerts. But paucity of time ate into my dream, and I had to quit playing after a 15-month learning stint. Although that was the end of my learning, my fondness for the instrument remains undiminished.

Naushad’s circumstances and life have been a galaxy apart from my own but what connects us is a common fondness for a bewitching musical instrument that works solely on the simplicity and beauty of nature. Anyone who can dish out a melodious tune from a bamboo reed is indeed accomplished. The bansuri walla may not be resource rich but in his own unique way is extraordinarily gifting.

Shakti Saran is an Inclusive World Citizen, Writer and Senior Fellow at PYXERA Global. All views expressed are his own