Fes is a must-do for travelers to Morocco. We are visiting Fes for just the day and decide to take the very first train departing Rabat. Our train is late by about 45 minutes but that hasn’t dampened our spirits. Fes was the former capital of Morocco till 1925. It is Morocco’s second largest city and its cultural capital and famous for its Medina, souk and caravansarais.

We get to Fes around 11 a.m. and our guide Saeed is waiting to greet us at the railway station. Saeed is not just friendly, he is gregarious. Our group is fixated on the Medina and nothing else and I rightly suspect it has to do with the shopping. The Fes Medina is perhaps the largest in the world and a maze of some 11500 alleys. And to think of it, the locals know their way like the back of one’s hand.

IBM is overwhelmingly concerned about our security so we have a plains clothe cop tailing us through the Medina, somebody we never get to see. Our first stop is at the famed open-air tannery, a UNESCO world heritage site. I have never been to a tannery before and this one is humongous.  Our guide takes us through the whole process and stresses on how the tannery only uses natural dyes. 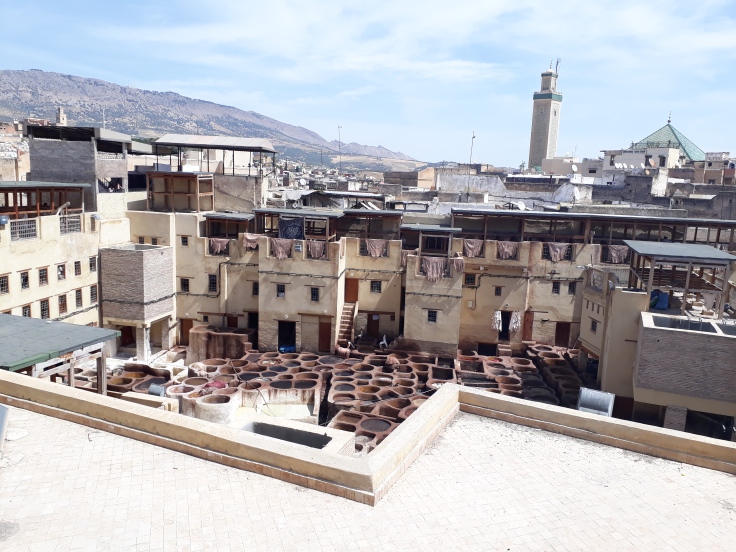 Our next step is at the carpet cooperative store. This is a deceptively modest structure as it does not reveal the numerous rooms and corridors, all filled with carpets, across three levels. The store owner delivers us a brief lecture on carpet making in the Fes region. These carpets remind me of the ones I have seen at Samarkand but the industry here is way larger and more organised than its counterpart in Uzbekistan.

Its lunch time and our guide ushers us into a traditional Moroccan restaurant. I settle for Pastilla avec Poisson (Pastilla with fish). This is an interesting dish. The outer crust reminds me of a samosa except that it is round it is stuffed with fish, eggs, tomatoes, parsley. cinnamon, garlic and honey.

Post lunch we indulge in a shopping spree. I am particularly interested in buying saffron but end up buying other things too. Thanks to Catalina, whose bargaining skills are numero uno, I buy a small rug which I will take home. My colleague Ulrich does better than me by buying three. We leave the Medina and head back to the railway station to catch our 6:40 pm train. I feel a bit incomplete not having seen anything else in Fes.

Our return train is also late. It’s the end of the spring break for school kids in Rabat and the trains are overcrowded even though we are in a first class cabin. We have to ask a family of passengers to vacate our cabin as we have reserved seats. This is about the most interesting train ride ever. Peter, Ulrich and I have Ghizlane and Achraf DADOUCHE for company. Ghizlane teaches English to high school kids in Rabat; she has been a Fulbright scholar and is returning from Ouzoud at the end of the weekend. Achraf, is an executive with Morocco national railways better known as ONCF and is preparing for his PhD on the sides. We have an animated discussion on Morocco; King Mohammed’s ancestry; the country’s ethnic and cultural diversity; the politics of Western Sahara & the Maghreb countries and the varied types of dates to be found in . Ghizlane laughs occasionally as she corrects my Google acquired knowledge of Morocco but she quickly hastens to add that when in Rabat make sure to use Google Maps and not to rely on directions given to you by people passing by. No matter what, Google has touched our lives in more ways than one.